skip to main | skip to sidebar

My spoonful of sugar

I enjoy many activities but I tend to only do one at a time and immerse myself in it for a while before my motivation dries up and then I move onto another thing. Over the last 7ish months I have been stuck on sewing. This time it's held my attention for much longer than one thing usually does. With all the things we had happening to and around us in 2017 on top of the post-partum mood disorder I get about 6 months after each baby, sewing became an effective stress management tool for me. It's something neutral to focus on which gave my brain a break, and when I accomplished a project it made me feel good.

I realized how reliant I became on this activity to regulate my mood that when I had issues with my thread tension around Christmas. I thought my machine was broken for good and I had a little panic attack. Then a week later-- a Christmas miracle! I figured out the knit fabric I was sewing was the problem and things went back to normal once I switched back to woven cotton. Crisis averted.

I've been sewing long enough in this stretch that I'm learning new techniques and more widely exploring the capabilities of my machine and my creativity. So far the things I make aren't very ambitious, but I try to do things that are useful and economical. I've been recycling a lot of old clothes supplemented by my fabric stash and the Joann Fabric remnants bin.

I made a lot of clothes for Pepper. (I awkwardly doctored the photos this way on purpose because I know too many people who had photos of their children stolen and republished on social media outlets by creeps pretending they were photos of their own children.)


Last fall I had a moment of "I HATE BUYING SHOES FOR KIDS. WHY ARE THEY SO EXPENSIVE AND BAD FOR THEIR FEET? I'M JUST GOING TO MAKE SHOES!" I finally bought this pattern I'd been eyeing and started making shoes for the kids. I experimented with different materials and not all have been successful. Once I got the hang of the pattern I started making booties as baby gifts to go with the nursing pads and bibs I like to make for new moms and their babies.

I pieced the top of this quilt when I was 9 months pregnant and trying to distract myself. I finally finished the rest midsummer. The storage closet of the ladies' organization at church had a ton of random donated fabric whose original purpose is forgotten so I grabbed this bag of cut squares to make a quilt. A lady at church mentioned that her senior living center can always use lap blankets in their transport van so I donated it to them. This was my first time using binding and machine quilting. I've only made tied quilts in the past. My little Brother sewing machine does a surprising good job handling a quilt. 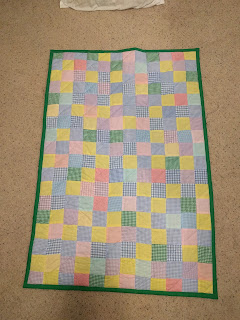 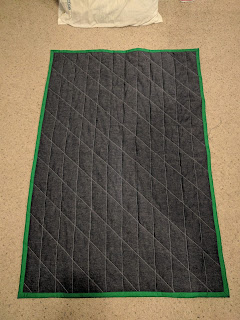 For Halloween we dressed as Goldilocks and the Three Bears. I made Pepper's yellow wig and bear hats for Reece and I with this pattern. The baby wore some bear bunting we already had.

I am particularly proud of this project. I bought this wool coat (paid like $13, original price $109!) around 2006 and wore it all the time in college. Eventually the original lining started to rip around the armpits. In that condition it probably wouldn't be accepted if I donated it to a thrift store, so I determined to re-line it because the shell was still in great shape. I started the process in 2016 with the help of this tutorial but then stopped when I started feeling crappy during my last pregnancy. I was worried I wouldn't be able to figure out where I was in the process because there were so many pieces, but I sat down and focused and figured it out! And now this awesome wool coat has new life! It doesn't fit me anymore so I'm going to give it to a girl at church in exchange for babysitting one of these days. 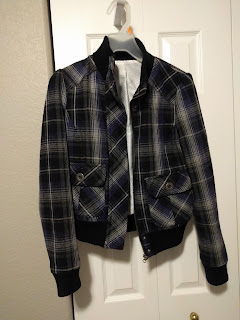 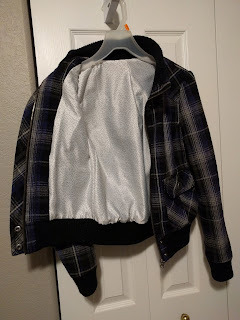 composed by Sadie around 4:22 PM No comments:

It's been a while, folks. I haven't had a lot of time to blog. When I did have time I didn't have the heart. I just wanted to sit on the couch and do something mind-numbing to rest my brain and body.

However, my baby just started sleeping through the night (like, completely through the night till 6 or 7 am, not just the medical definition of a 7 hour stretch that means I still have to wake up and feed him at 3 am) and so I feel like a new woman! Suddenly I have energy stores and motivation I haven't seen since 2016.

Since last blogging, my little family


I can't honestly say it was a bad year because there were so many blessing among the trials and trips. Nothing was as bad as it could have been. Everything could have been SO MUCH WORSE. There were lots of happy things that happened too. It was more a weird year. A crazy year. Not in that "oh life is crazy" way adults use it as an excuse for why they haven't kept in touch, but in a crazy everything-was-actually-extreme kind of way.

The strain of it all on top of night after night of interrupted sleep was very taxing. I saved my brainpower for parenting and homemaking. I managed stress through sewing and crocheting while binge watching old seasons of Downton Abbey and America's Next Top Model. I didn't want to write down or share my thoughts.

I have a little distance and longer stretches of sleep since the worst of 2017 now and I'm ready to write again. Maybe I'll do catch-up posts. Maybe not. I'd like to share some of the things I've been making and activities we're looking forward to this year. Are personal blogs even still a thing in this era of Facebook and Instagram? Whatever. They are for me. See you around.

composed by Sadie around 4:43 PM No comments:

In case you didn't read to the bottom of the last post, I'm pregnant. Surprise!

In a strictly medical sense, this pregnancy has been very much like the first one. From a personal management perspective, it's been way better. I'm a stay-at-home-mom this time around with the time and space to take care of myself better and it has made a big difference in my emotional, mental, and physical health. In retrospect, I can see I was a mess last time, always stressed out from work and always forgetting to eat and drink water through the day.

One interesting byproduct of improved health this time around is I'm getting nesting urges. This never happened last time, so it was a little weird at first and I'm almost self-conscious about it. There hasn't been a ton for me to prepare for the baby, so the nesting has resulted in a variety of other projects, often baby-related projects for family and friends.


composed by Sadie around 2:41 PM No comments:

Sadie
I have red hair. I like jello, gummy bears, elk roast, mashed potatoes, and corn. I love pioneers. I'm from North Idaho. I talk a lot. I laugh a lot. I'm usually the favorite. I study whatever I want. I have traveled to 10 countries and 23 American states. I saw Japan from 40,000 ft up. I like to run. I love to dance. I like any music you can dance to, and other kinds too. I play the piano. I play the harp. I like walks on the beach but bubble baths take too long. I like to eat. I like to sleep. I do not like to pack, and I do not like to unpack even more. I love a good story.